Burros participate in Parade of 1000 Flags 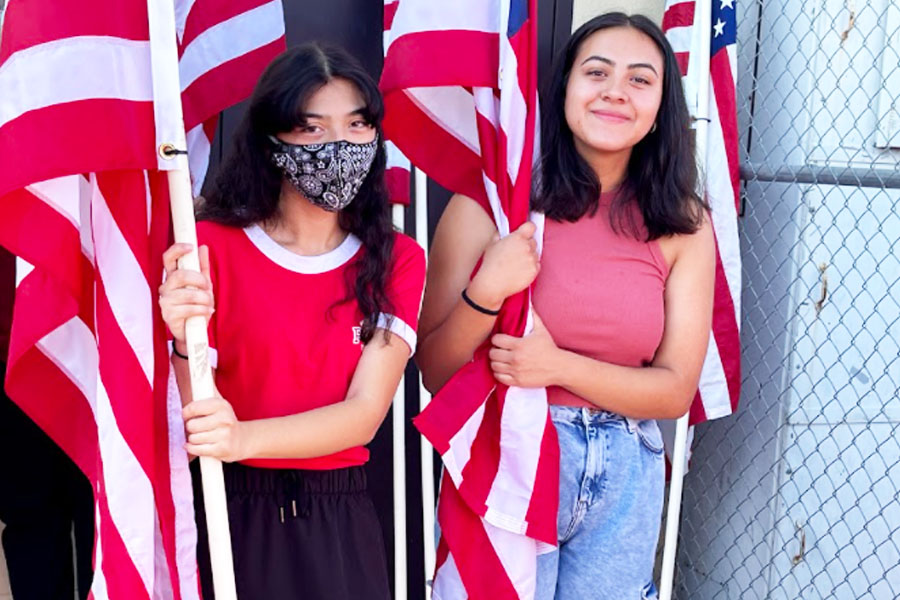 AVID juniors Azalia Hernandez and Nathaly Flores join other students before the parade.

Several Burroughs organizations and individual students took part in this year’s Parade of 1000 Flags commemorating the twentieth anniversary of the Sept. 11 terrorist attacks.

The Burroughs Band and Colorguard performed along the parade route, while students from Friends of Rachel, Key Club, and AVID Club carried flags along with hundreds of participants from the local community.

Friends of Rachel Advisor Shari Rosenberg noted participating in the parade is a tradition for the club and welcome the opportunity to participate in the community event.

“They think it is an opportunity to participate in a show of respect for the victims,” said Rosenberg. ” They also see their participation as a bonding event for the club as a whole.”

Another group that has participated for many years is AVID Club.

“I enjoy participating with our AVID students in the Parade of 1,000 Flags,” said AVID 9-10 Teacher Bob Hope. “As an AVID family, we were able to gather with other families and community members in remembrance of the 9/11 attacks and honor those who lost their lives. ”

Hope said many students were pleasantly surprised by the number of people participating in the parade, the stream of American flags, and the community support that participants received.

AVID 11-12 Teacher Ernestina Palerm Wilson said that the parade has become an AVID tradition over the years and kickstarts the group’s community service efforts.